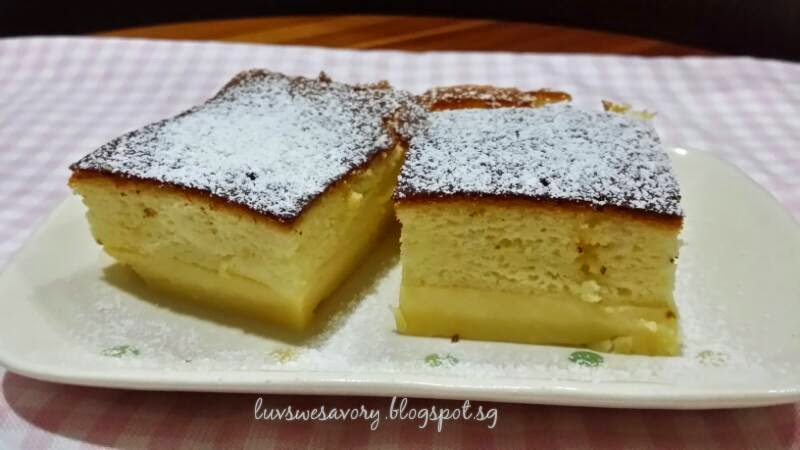 Finally ...yes finally ! I pick up the courage to bake this Magic Custard Cake !

I read the recipe & video tutorial shared by Cheryl of Bakingtaitai (thanks Cheryl) and I also found another similar recipe by whiteonricecouple .
There's not much difference except a few drops of vinegar used to help stabilize the egg whites after they've whipped to stiff peak in the recipe of White on Rice Couple.

I attempted this Magic cake in 2 different baking pans. 1 baked with a small 750ML rectangle Pyrex dish and another 1 in a square 8"x8" baking pan lined with baking paper. I just fill the square baking pan the remaining batter after I've poured batter on the Pyrex dish. I wanted to see which baking pan yields better texture. Also thinking that in case 1 failed,  I have the other 1 to fall back on (LOL), here's the results:
Pyrex dish : the 3 layers are visible ... However the top flour cake layer is fluffy and thicker than custard. The middle layer custard is slightly softer.

Square pan :  Gosh ! Ahrgg!! I realised that I didn't grease the baking paper with butter and the whole piece of cake got stuck onto it ! Haiz! How could I have forgotten !!! Unable to cut a nice piece for photo :(  But I could see the 3 distinguished layers are almost in equal proportion.

It tasted better when chilled. After this bake, I really got the 'hang of it' to try other flavour like chocolate,  pandan etc. Hope will do better 'Magic' the next round. ^-^ 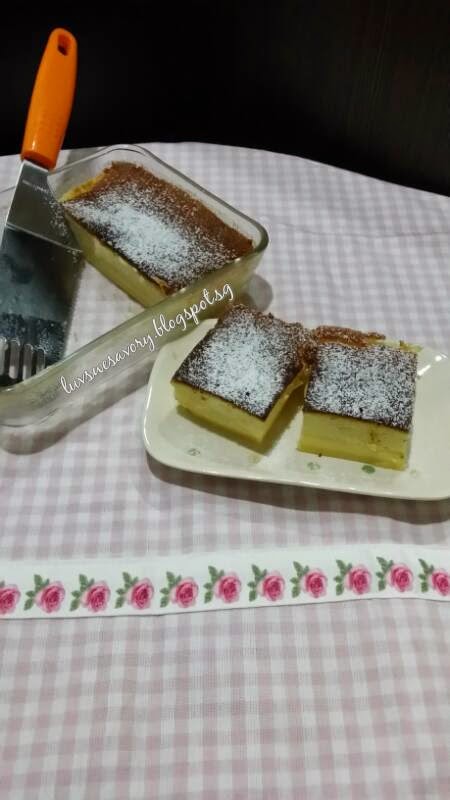 
Method:
1) Preheat the oven to 325°F (160°C)
2) Lightly butter or grease a 8"x8" baking dish.
3) Melt the butter and set aside to slightly cool.
4) Warm the milk to lukewarm and set aside.
5) Whip the egg whites and vinegar to stiff peaks. Set aside.
6) Beat the egg yolks and sugar until light. Mix in the melted butter and the tablespoon of water for about 2 minutes or until evenly incorporated.
7) Mix in the sift flour until evenly incorporated. Use a hand whisk and slowly beat in the milk and vanilla extract until everything is well mixed.

8) Fold in the egg whites, 1/3 at a time.
Repeat until all of the egg whites are folded in. For folding in the whites, it is done with more of a gentle whisk/folding motion with the whisk since the batter is so runny. The whites will look a little curd like after mixing them in, just try to mix/fold them to the point where there is no big chunks. (I used spatula to fold the egg whites).
9) Pour the batter into the prepared pan and bake for 45-60 minutes or until the top is golden.
10) Allow cake to completely cool before cutting and then dust with confectioner's sugar.

Linky another milk post to Little Thumbs up (May 2014: Milk) organised by Bake For Happy Kids, and My Little Favourite DIY, hosted by Tze of Awayofmind Bakery House


Posted by Karen Luvswesavory at 10:17

Email ThisBlogThis!Share to TwitterShare to FacebookShare to Pinterest
Labels: Cakes