What's the difference between a crêpe and a pancake ?

Answer (from wiki.answers.com)
Crepes are trickier to make than regular pancakes. With pancakes, you basically just mix the batter and then simply plop half-cups of it onto a hot pan. And unlike pancake batter where some lumps are of no consequence, crepe batter has to be smooth and more fluid sort of like heavy cream.
In terms how they are served, crepes aren't usually served plain or in a stack-- they are rolled. Lighter and thinner, they are used to create both sweet and savory dishes. Crepes can be topped or filled and rolled with fruit or cheese, or even with meat, cheese, or vegetables. They are often accompanied by some kind of sauce and form the basis of an appetizer or main course. 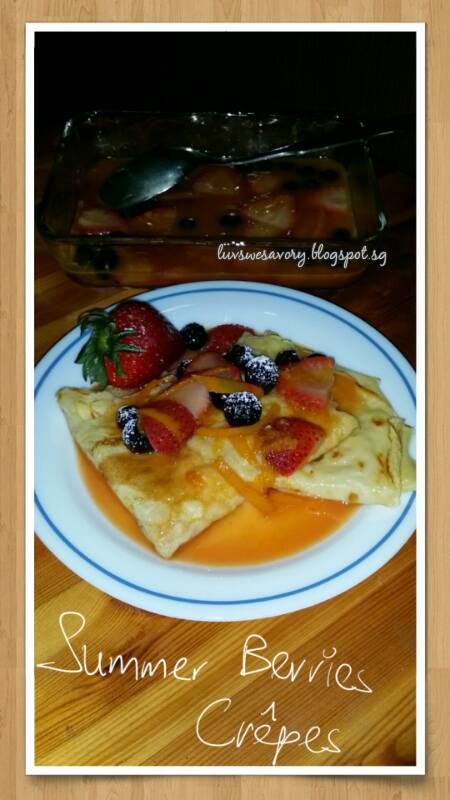 Honestly, I could hardly remember how was the crêpe texture like other than it was much thinner than a pancake. I could use my five fingers to count the number of times I've eaten crêpes in all my life ... twice the filled and rolled with some sweet fillings type and once that served in sauce.

Well, with some oranges and some big sweet strawberries, blueberries in the fridge, I decided my 1st attempt on crêpes.

For the fruits mixture
1 tablespoon low-fat spread
50g caster sugar (I used 35g)
Juice of 2 oranges (almost 200ml on my measuring jar)
Thinly pared rind of 1/2 orange
350g mixed summer berries such as sliced strawberries, raspberries,  blueberries and redcurrants.
3 tablespoons Grand Marnier or other orange - flavoured liqueur. (May omit this if children are taking this dessert)

Method:
Step 1) To make the crêpes,  sift the flour into a large bowl and make a well in the centre.  Break in the egg and gradually whisk in the milk to make a smooth batter. Stir in the vanilla essence. Set the batter aside in a cool place for up to half an hour.

Step 2) Apply a light, even coat of spray oil to an 18cm non-stick pan. Whisk the batter, then pour a little of it into the hot pan, swirling to cover the base evenly. Cook until the mixture comes away from the sides and the crêpe is golden underneath.
{Note: My non-stick pan is 28cm, I folded kitchen towel and dap with some unsalted butter and greased thinly on pan. I transferred the batter into a big jug for easy pouring}.

Step 3) Flip the crêpe over with a large palette knife and cook the other side briefly until golden.  Slide the crêpe onto a heatproof plate. Make seven more crêpes in the same way. Cover the crêpes with foil or another plate and keep them hot in a warm oven (preheat the oven to 150°C)
Step 4) To make the fruits mixture. Melt the spread in a heavy-based frying pan, stir in the sugar and cook gently. Add the orange juice and rind and cook until syrupy. Then add the fruits and warm through (reserve some for decoration), add the liqueur and set it alight. Shake the pan until the flame dies down. {I skipped setting it alight as not skillful in doing this}.

Step 5) Fold the pancakes into quarters and arrange two on each plate.  Spoon over the fruit mixture and dust with icing sugar. Serve the remaining fruits separately.

I've got 7 big crêpes as mine was a 28cm pan (I don't have a smaller size frying pan either) Also, I've poured too much batter on making the first 3 pieces as they were slightly thicker than the last few.


We served this as our appetizer (eager to taste them). My girl was so engrossed with the sauce and dusting the icing sugar that she'd forgotten to reserve a piece to make rolled crêpe with Nutella spread.

The fruits mixture is really appetizing with sweet, fruity and citrus taste.

So, will I make another round of crêpes?  Oh yes definitely ... will try the rolled Crêpes with different fillings ... spread with Nutella,  jam with some dried raisins & apricots, whipped cream with fruits and the famous Crêpes Suzette!!^-^
With so many variations to enjoy Crêpes ... should I purchase a right pan size to make Crêpes ? :D

Linky another milk post to Little Thumbs up (May 2014: Milk) organised by Bake For Happy Kids, and My Little Favourite DIY, hosted by Tze of Awayofmind Bakery House

Posted by Karen Luvswesavory at 13:11

Email ThisBlogThis!Share to TwitterShare to FacebookShare to Pinterest
Labels: Desserts